Allen was born and raised in a rural area near Claremore, in northeast Oklahoma.  He grew up doing farm work, was active in sports, and also active in church.  After High School graduation he went on to earn a Bachelor’s degree in biblical studies and political science from Oklahoma Baptist University in Shawnee, OK.  He later went on to The Southern Baptist Theological Seminary in Louisville, KY where he earned a Master of Divinity degree in applied theology and then a Doctor of Ministry degree in expository preaching.  He has pastored churches in Oklahoma, Missouri, Colorado, and has been at First Baptist, Rogers since 2013.

Allen and his wife Tommi were married in 1993 and have 4 children: Rebekah, Mark, Ryan, and Devin.  Tommi is employed as a labor and delivery nurse.

Robert is a native of South Texas and graduated from Gregory-Portland High School.  He went on to college at The University of Mary Hardin-Baylor (UMHB) in Belton, TX playing football and earning a double-major in Psychology and Theater.

Robert is married to the love of his life Kristy and they have two children Hunter and Emma.  Kristy helps lay a foundation in children’s lives as a 1st grade teacher.

Robert is heavily involved in the local school system as a 4th grade teacher, driving a bus, and is the public address announcer of all home football games, both junior high and high school.  Robert is passionate about young people and helping them get, and keep their lives on the right track and develop a personal walk with the Lord Jesus Christ.

Since 2010 Robert has served as youth pastor at First Baptist Church. His love and passion for the Lord’s church grows right along with his love for young people.  He pours his heart and soul into their lives and the overall body of Christ.

Robert loves just about all sports, but especially football and baseball.  He loves to play golf every chance he gets.  He also is a big fan of fantasy football.  He enjoys cooking (especially barbeque), loves movies, and spending quality time with his family and friends. 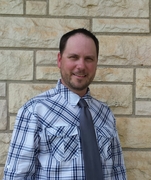 Brian was born in Texas City, Texas in 1978 and moved to Cameron, Texas a few years later. He was raised in a Christian home and was very involved in church. As an active youth, he was a leader in Boy Scouts and received the “Living Faith” medal. He enjoyed competing in sports and received the John Phillips Sousa Award and The Director’s Award in the high school band. In 1996, he graduated from C.H. Yoe High School in Cameron. He received a music scholarship from Temple College and graduated with an Associates of Applied Science Degree in Management, Certificate in Management, and Certificate in Small Business Management.

Brian has been a successful store manager at major retailers for several years before relocating back to Cameron where he accepted a position in law enforcement. Five years later, he started his own retail business, Brian Weaks Music. He also teaches several music instruments to a full schedule of students. Brian has volunteered as music minister at First Baptist Church in Cameron and also enjoyed being a part of the youth ministry at Marlow Baptist Church in Cameron.

Brian has many hobbies such as collecting football cards, playing board games, watching
sports, writing music, camping, fishing, and traveling.

Brian embraces both traditional and contemporary Christian music with energy and enthusiasm.
He is happy to be serving the Lord with his music ministry at First Baptist Church of Rogers and fulfilling his dream of becoming a music minister.

In 2009, Brian married his long-time best friend, Stephanie. Together they have two children, Forrest and Cora. Brian also has an older son Dylan. They are all active in many activities and enjoy family time fishing, gaming, and church. Stephanie has spina bifida and is an example of God’s wonderful miracles. She is an active stay-at-home mom with many hobbies such as sewing, crafting, teaching, and music. She has been an ambassador for March of Dimes and continues to be an inspiration to others with disabilities.

Stephanie has served FBC as church secretary since August, 2018.  She is a native of Cameron, TX and a 2002 graduate of Cameron High School.  She later earned an Associate’s Degree from Central Texas College in Killeen (2012).  She and her family lived in Alaska for 7 years while her husband was stationed there with the Army.

Stephanie and Doug have 2 children, Jordan and Haylee.  Doug is an Assistant Superintendent for Novo Construction in Austin.

In her spare time Stephanie enjoys movies, sports, working out, going to the lake, and spending time with her husband and kids.

Jennifer is a life-long resident of the Rogers community and graduate of Rogers High School.  She has been a part of the FBC family since her high school days.  She has served as church custodian since January 2016.  She formerly served as the FBC church secretary for more than 5 years.

Jennifer, and her husband Lee, have been married since 2002.  They have 3 daughters; Jesika, Tanner, and Trinity.  Lee is self-employed in the heating and air business and in his spare time coaches girl’s softball.